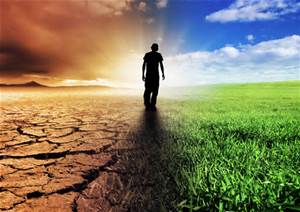 “Men argue. Nature acts.” Though said an approximate 300 years ago, Voltaire was already onto the right idea: while our leaders in power argue and debate over the best way to stop the drastic effects of global warming, nature continues to rear its head and take in the tons of carbon dioxide we contribute, making the conditions on earth worse and worse. So why isn’t anything being done? If we know this is an issue that’s increasingly detrimental to our planet as each day passes, what’s stopping any possible course of action? Well, like the majority of all global issues, it’s complicated- but not impossible. The good news is that there’s an ever-growing consensus that climate change is a problem we can no longer avoid, and that more and more influential individuals are calling attention to the fact and demanding change. The bad news? We’ve already caused irreversible damage to our world as we know it, placing it in a precarious state for future generations and if we can’t come up with any sort of comprehensive solution soon, Earth will take a decidedly dramatic and fated turn for the worse.

What is it, exactly?

By definition, climate change is a shift in regional or global atmosphere. Though it certainly existed before the 20th century, it wasn’t until the latter duration that it became a more apparent issue to both scientists and the general public. The Industrial Revolution is to blame; with its impressive smokestacks pumping out thick, black clouds, production may have been greatly bolstered, but the breathing process was made a bit trickier. This gas, later classified as carbon dioxide (CO2), is released into the air along with a cocktail of other greenhouse gases burning our limited supply of fossil fuels, trapping an abundance of superfluous heat into the atmosphere. Thus, we get the hot-button issue of global warming, which ranges in severity of effects on assortments of ecosystems, namely rising sea levels, increasing severe weather instances, and droughts that render perpetually-dry landscapes all the more prone to wildfires.

In the sphere of politics of the 1980s, when climate change was just bursting onto the scene as a hot button topic, it began to emerge as yet another for which conservatives and liberals eternally squabble. A surprising number of organizations even into today hold fast to the beliefs that the evidence towards climate change is simply too inconclusive (never mind the proof that worldwide temperatures are rising faster and higher than ever, and the physical data that this is changing environments every day), or that this is a natural event that humans can’t confirm or be linked to (even though scientists have confirmed “lighter” carbon emits from fossil fuels, and assortments of tests conclude a clear increase in lighter molecules, corresponding indisputably close with the known emissions trend).  Despite this, the U.S. Environmental Protection Agency (EPA), National Aeronautics and Space Administration (NASA), and the National Oceanic and Atmospheric Administration (NOAA)- organizations that are pretty removed from slant or excess bias-  have all come to the conclusion that climate change is happening and is the fault of humanity. Argue all you want, but when three reputable scientific foundations all come to the same resolution and present the data to back such up, the point is made that something- aside from the increasingly unstable climate- needs to change.

There isn’t a concise answer for this that does an explanation full justice, but it is worth noting that climate change is fueled by both natural and human activities. In the former, the largest natural influences include the solar cycle, periodic volcanic activity, and the annual El Nino that strikes. However, most scientists surmise that recent natural contributions have been cooling temperatures and actually masking parts of the human contributions. Most greenhouse gas contributions, then, fall into that from humans; most specifically, from the burning of coal and oil for energy, though deforestation and agriculture also augment these levels. So while some of these are actually benign to Earth’s temperature control system, we’re raising those levels far too quickly for any real benefit. For terms of conceptualization, take the concentrations of CO2 in our atmosphere. Between the rise of human civilization, from about 10,000 years ago to 1900, these levels didn’t rise above 300 parts per million (ppm); current estimates place that figure at about 400 ppm- a level that hasn’t been reached on earth in over 400,000 years. Pointing to none other than, gasp, humans and our insatiable ingenuity for this alarming acceleration.

For simplicity’s sake, a shocking number. These small changes are mounting up to have astringent effects- ones that are beginning to happen without giving the chance to find any real solution for them. Current surface temperatures have been steadily rising over the past century, and are expected to continue to do so by another 11.5°F in the next; though those spikes may seem small in numbers, the fact that the average temperature between our last Ice Age, nearly 2.6 million years ago, and today is a slight 4°F should trigger more of a wake-up call. 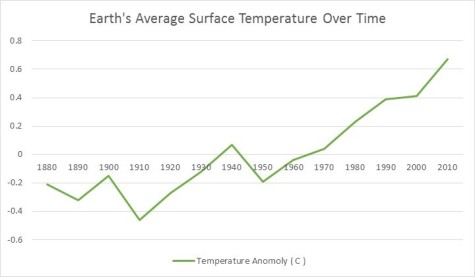 Climate change is also showing drastic effects on the global state of our seas. As ice melts away, the cooling layer that ensures its protection melts away, leaving water exposed for the absorption of more sunlight, thus causing a steeper incline in temperatures. This not only heats up the water, but also causes sea levels to rise significantly. In tandem with one another, the results are a loss of Arctic, and Alaskan, for those who think this stands no impact on America, habitat for those who call it home- from the likes of walruses losing the ice blocks they use for hunting and temporary habitat, to that of humans displaced by the shrinking permafrost that they’ve called home for generations- and a heightening in exacerbated storms, impacted most heavily in the likes of El Niño. Predictions for this year are grimmer than ever, and the irony of the situation is that this torrent could completely miss the mark where a break from heat and drought is most desperately needed: California. The state’s fire statistics allege that there have been over 5,000 fires so far this year, and that these have burned nearly 300,000 acres. About 1,600 homes are thought to have been destroyed in the flames so far, and though they’ve been manageable with firefighters lucking out on containing them before they reach major pockets of society, this fortune can’t be counted on to continue. Standing currently in a four-year drought- the most severe in the 120 years of the area’s recordkeeping- that’s projected to go onto five, the threat towards homes, habitats, and people themselves is only climbing. 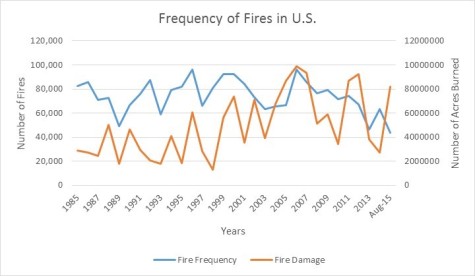 Most frightening, maybe, is the simple fact that these remarkable weather events are no longer shocking us: temperatures hot enough to melt sidewalks, fires massive enough to been seen from the next city over, smog so thick that masks are a standard if you’re going to be outdoors for an extended period of time, rushing floods from intense storms that require helicopters for evacuation, and communities being forced to transplant all that they know to another location entirely because they’re literally losing the ground they stand on. They’re becoming something that’s reported about on the news every other day. Anything wrong with that picture? The fact is, the need for something to be done has never been so urgent.

In order to really begin to halt these pollutants and their nasty effects, there need to be a decided coalition- or at the very least, a firm agreement- between the majority of populous, influential countries that could reach a united plan for action. Beginning in 1992 with the United Nations’ Framework Convention on Climate Change (UNFCCC), which set a long-term goal of stabilizing greenhouse concentrations in the atmosphere at a level to prevent dangerous human interference, the international community began to deliberate what target and measure would be the best approach; one that could be accomplishable, efficient, cost-effective, and yet still get the job done without changing the larger part of any infrastructure already in place. 1997’s Kyoto Plan extended that initial UNFCCC goal to 5.2% reduction in emissions by 2012, but the plan was never signed entirely into action by the world’s top 3 CO2-producers of America, China, or India, and it’s all-around success was questionable. The Bali Roadmap may not have met total success in a global agreement in 2009, but it did set emission targets for developed countries while allowing other types of commitments for developing countries to garner the largest participation possible.

The U.S. is also doing its best to contribute to this endeavor, with President Obama showing a newfound regard towards the state of our planet. ”Climate change is no longer some far-off problem,” he expressed on his recent trip to Alaska, one made with the intention of drawing the attention of the public (and Congress) to the issue, “it is happening here, it is happening now.” Reiterating that “we are not moving fast enough,” or anywhere close to what we should be, within his address on the trip, the major goal for his last year in office seems to be fixating itself on establishing a significant deal at the climate talks in Paris later this year. His promise of cutting emissions by 2025 is already showing that focus, pledging 26-28% drop in that time frame. Even more focused, Maryland has implemented what is known as the “Greenhouse Gas Reduction Plan,” aiming to reduce the levels of concentrations within a range of 25% by 2020 (roughly equating to 55 million metric tons of CO2 equivalent annually). The bonus, if it succeeds, is the requirement of it to have a positive impact on job creation and economic growth in Maryland- current analysis places these figures at about 37,000 employment opportunities and generating $1.6 billion.

But I know what you’re thinking: how does any of this impact me? Or, in a more hopeful thought: what can I do to help this push? Fear not, because the majority require the smallest changes or minimal effort, and can be done within the comforts of your own home. Replacing the bulbs in your home with ENERGY STAR lighting can drastically change your carbon input- they provide all of the warmth and heat of the regular, but use 75% less energy and last 10-50 times longer- is one step that can be taken. Additionally: simply being smarter in handling the heating and cooling in your home works wonders, as well as using your water in the most efficient manner; and reducing, reusing, and recycling to conserve energy wasted in resource extraction, manufacturing, or disposal.

Earth’s population passed the 7 billion mark in 2012, and shows no real signs of slowing anytime soon. Scientists already worry about how long the planet will be able to sustain this population with the resources available to us, which are only shrinking day by day. Someday oil and materials won’t be the object of wars and disputes; it’ll be the rights to land with trees, or freshwater locations. The generations of today may not believe it’s their problem, but with that ideology, we’re ruining any chance they have for salvaging it. We need to realize that climate change is something that needs addressing, and action, now- though  science is expanding by leaps and bounds annually, this is the only home we have. Making these issues known ones and working to change them is just assuring that beauty for future generations, and ensuring the inherent right that should be given to all: clean air to breathe, fresh water to drink, and the chance to stop and bask in the natural wonders that surround us every day.

If you want a picture to show with your comment, go get a gravatar.

The Imprint • Copyright 2021 • FLEX WordPress Theme by SNO • Log in