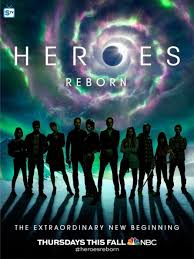 Last week, the hit television series “Heroes” returned in the form of “Heroes Reborn” and television addicts like me rejoiced with a spasm akin to a seizure. The new installment of the series starts after a five year time jump from the shocking finale of the original when Claire Bennet announced her kind’s existence to the world. I’m getting ahead of myself now. For you “Heroes” virgins out there, this is the story of extraordinary powers finding the strength to save the world. No, this is not X-Men. It is a drama, a mystery woven together with the textbook action scenes of any super powered series. It may not be serving our addiction to original favorites like Sylar or Peter Petrelli but it showcases the same gripping writing of the original, a host of new powers with action scenes to match, and a smooth shift to the new series with a few of our old favorites.

“Heroes” rocketed to the top of the ratings with its global yet personal writing style. The series follows its super powered subjects as they discover their awakening powers and struggle to hold on to their ordinary lives. Every episode jumped from character to character, watching each of them come to terms with their powers and scratch at the shared goal to save the world. These heroes were not bred to be the ones plastered in comics. They struggle and squirm, their humanity exaggerated through their powers, rather than the traditional hero that swoops above the ordinary like a god. “Heroes Reborn” made its debut with the same cognizant storytelling, each episode inching their stories closer and closer to unraveling the mystery at which they are all pawing. Its characters may not be living by the mantra of the first season of “Heroes,” “save the cheerleader, save the world,” but they have their own mystery to solve after “evos,” evolved humans, are blamed for the tragic bombing of Odessa, Texas. Series favorite Noah Bennet, the man with the famed horn-rimmed glasses, joins conspiracy theorist Quentin to unravel the mystery. While critics have deplored the reboot of the series for slipping into the same plot as the original, with Japanese evo Nikko and sidekick Ren subbing for original favorites Hiro and Ando, stories like that of Carlos are a fresh addition to the reboot. The war veteran may not have the powers of his brother, but faces the same human struggle to grieve and find purpose. He offers a fresh theme to the “dusty” series critics claim it to be: that everyone has the potential tomake a difference, to be a hero.

For those of you hooked on the original’s impressive special effects and wild powers, “Heroes Reborn” does not disappoint. The series boasts a teleporter, a girl that can manipulate shadows and even a warrior with the strange power to digitize herself into some sort of online gaming world (I’m not sure how that power works yet). There are new powers to explore, to say the least, and new characters to match. Some characters, yes, may be inspired by the hits of the original, but they are joined by provoking new additions like Carlos, the real life superhero parading around the streets in a costume like a character out of a comic, and conspiracy theorist Quentin, driving the mystery of the series on his quest to rescue his sister. “Heroes Reborn” introduces Molly Walker, the powerful little girl from the original series all grown up, pinned to a wall by a telekinetic. If these super powered brawls and the notorious Noah Bennet waving his gun around are not enough for viewers just yet, “Heroes Reborn” has been seducing us with clips of a girl with the power to manipulate the weather.

Critics may accuse the reboot for taking cues from the original series, but characters like Noah Bennet are vital through lines not only in maintaining the “Heroes” fan base, but inmaintaining the trajectory of the story. “Heroes” left viewers in awe after Claire Bennet; the cheerleader, the girl who can spontaneously regenerate, the younger perspective; flung herself off a Ferris wheel on live television. She not only outed the powered community desperate to live normal lives, but thrust her father Noah and the series’ new band of heroes into the world’s response. “Heroes Reborn” is a continuation of the original storyline, not a reimagining, and must stay true to the structure and characters that brought the series to stardom. Characters like Noah Bennet, Hiro Nakamura, Mohinder Suresh, Molly Walker and Angela Petrelli are the firm foundation that allows the new series to experiment with innovative characters, like an evo-hunting couple that lost their son to the Odessa bombing. Powers have brought their humanity to the surface like so many others in the series, showcasing the depths of grief and resentment and fear of confrontation, along with this week’s plot twist that the husband is one of the very creatures he has sworn to slay alongside his wife. Should “Heroes Reborn” abandon this powerful theme? Should it deny its original success? Should it abandon the loyal fan base that catapulted it to one of the biggest hits on television? If you, the critics of the series, have any common sense you answered a conceding “no” to these questions. Without throwbacks to the success of the original series, “Heroes Reborn” would not even have a story to tell.

Action packed fight scenes streaked in energy bolts and super speedsters, heart wrenching shows of humanity, mystery: everything that made “Heroes” a hit series years ago is reborn in the recent premiere of “Heroes Reborn.” While it has received heat for continuing the same style of storytelling that gripped views of “Heroes” for years and employing similar characters to those that graced our screens, “Heroes Reborn” is a powerful continuation on a gripping story. It is not a corny show of special effects but a powerful work of storytelling that television often lacks in this day and age. Whether you are a loyal follower of the original series like me or are just discovering the hit, no one can deny that interest in the “Heroes” universe has been reborn.