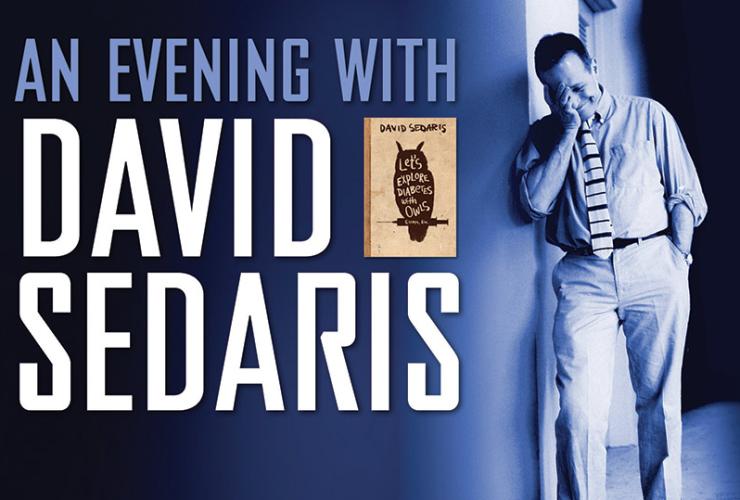 Until I met David Sedaris, I had no idea I cared about the lives of others. Ok, I’m not heartless. I just never thought a memoir could be so gripping, that another life could draw me so helplessly in. I had read memoirs before but only about astronauts or politicians that changed the landscape of the country; lives school pushed down my throat. But Sedaris’ reading last Friday was clean, gripping, hilarious, everyday life spilled on the page. With ten books and seven bestsellers under his belt, it’s no wonder that his memoir style has merit. It felt like a parent or grandparent, sitting you on their lap and regaling you with funny stories of all the mistakes they made and all the insight they garnered growing up. He made everyday life relevant and did so through his conversational style.

St. Mary’s College hosted the bestselling author last Friday and it was epic to say the least. Of course I was in the company of super fans exalting Sedaris. They swarmed around me like bees in line to meet the author, mostly notably Leonardtown’s own Mrs. Wogman and Ms. Bridges. But the fact is, his talent was undeniable. He made everyday occurrences interesting, as simple as holding the elevator door for a pack of ladies. He painted every detail of the giggling ladies piling into the elevator with him, each selecting a different floor. We have all shared an elevator with unpleasant company and Sedaris is not afraid to tackle those mundane details. It is what makes the memoir genre sing; not that someone solved some complicated equation or won an election but that they lived their lives.

Sedaris has lived his life in the states, France, England, Tokyo, shopping outlets, but his writing is not about talking down to readers like myself who have only stepped beyond state lines a few times. His writing is about sharing the life of a simple man, considering and experiencing his life with readers facing the same circumstances. His writing is about being relatable. Bestseller Me Talk Pretty One Day’s first chapter, “Go Carolina,” chronicles Sedaris’ childhood war with his speech pathologist. He was haunted by the woman trying to fix his pronunciation of his S’s. But, instead of exchanging Th’s for S’s, Sedaris exchanged words with the S sound for a new vocabulary. He carried a thesaurus of substitutes, something at which his teachers marveled. Sedaris did not rocket to the moon. He lived his life, and that’s the magic that has made his writing relevant all through his long career.

I had a chance to meet the author before his 7:30 reading. I waited in line for an hour, surviving cuts to the waiting line and super fans butting arms for space. I thought Ms. Bridges might have a heart attack when she nearly lost her place in line. When I finally made it to the author, he was strange yet personable. In his humorous style, he gave me a small booklet to write a checklist of things to do before I die, titled “Deathbed Requests.” He said it was because I am a teen, and to make sure my life is in order in case I am flattened by a car. He signed my copy of Me Talk Pretty One Day with the words, “to Jason, I look forward to reading your book.” For an aspiring writer, that triggered a response akin to Ms. Bridges’ own heart patter.

It’s not often that one meets a published writer, even less often that one comes to little St. Mary’s County and even more so less that someone changes my opinions. But Sedaris’ effortless memoir reading at St. Mary’s College last Friday did just that. He makes the mundane interesting. He speaks effortlessly at readers’ level. He was a fascinating addition to St. Mary’s College’s annual Mark Twain Reading Series. Who knew such a great author escaped my attention, and that of so many others?