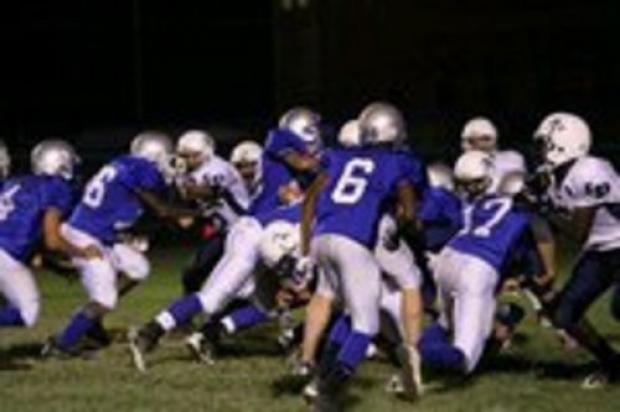 Football in previous years hasn’t done that well. This year everything changed. The boys had two goals at the beginning of the season: to win the county championship and to finish the season at .500. They did both, winning the county championship for the first time since 1989 and finishing the season at .500 for the first time since 1997. They finished with a record of 5-5, and 5-3 in the conference. The football team will be losing 15 seniors, including captains Corey Dennee, Darin Winters, Steven Stewart and Marcellus Butler. The two other captains are Brandon Dennee and Zac Sparshott. The star players were Steven Stewart, who is the all SMAC and leading rusher in SMAC with over 1400 yards, and Damien King, who is all SMAC with seven interceptions. “Overall the season was very good. We set a lot of records for the school both offensively and defensively. They boys played their hearts out and won against all odds including beating Patuxent (ranked #11 in the state) for the first time in school history,” Coach Nines said.

The cheerleaders were great this season. The biggest challenge was bringing many different levels of experience together to make a solid team, because the team was so young. Even with a young team they managed to make great achievements. All six stunt groups were executing advanced level one leg stunts, most with full downs. They will lose eight seniors, including the two captains Casey Hunt and Heidi Thompson. The seniors were a huge attribute to the team. “This season was great! The girls really came together as a team and challenged each other. We had a wonderful time at camp and came back with new material and stunts. All twenty-four athletes really pushed themselves and achieved elite things—they should be very proud of themselves. The seniors are all so talented and experienced—some of them have been on varsity for all four years! They really helped bring the level of the team up. We also had some amazing new freshmen on the team!” Coach Collins said.

Throughout the fall season, the volleyball players overcame some hardships. They had a really hard time putting together a team without the experience level that varsity needed. All of the offensive players from last year graduated or moved away. Despite that obstacle, they pulled through and won against Huntingtown and LaPlata in the same week. The two captains were Savannah Norton and Madison Bohrer, and this year they will lose four seniors. They finished 9 and 3 in conference and 10 and 6 overall. “This season was filled with all kinds of surprises,” Coach Correll said.

Girls’ soccer was on a roll! The captains were Shannon Byrnes, Alyssa Bois, Heidi Reed, and Laura Shaner, some of them being the nine seniors that are leaving this year. The overall record for the season was 11-3. The SMAC title was a tie with Huntingtown and North Point. The girls overall season was a success.

Boys’ soccer went well this year as well. The biggest challenge for them this season was solidifying their defense to make them stronger and better. Their overall score was 12-3 for the season, and they won the SMAC title for our Raider Nation! Eleven seniors are leaving this year, as well as captains Chad Selph, Gabe Sarlo, Justin Nestor, Will Leibler, and JP Zaoroski. “Excellent season overall. This team steadily improved throughout the year,” said Coach Holland.

Golf, cross country, and field hockey had good seasons as well, keeping the Leonardtown spirit high! The coaches could not be reached for further comments.