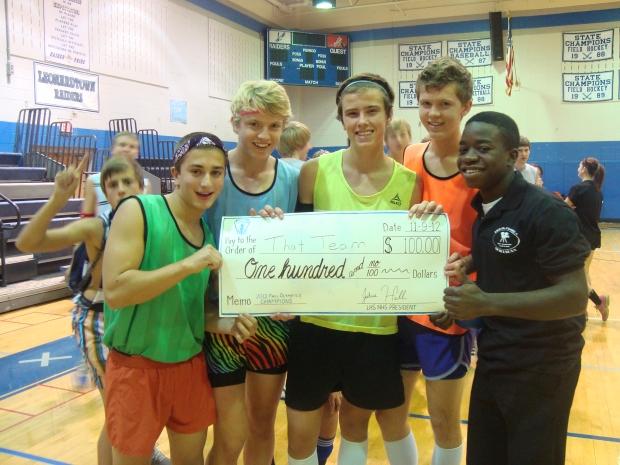 Dane Lemmon, Troy McLaughlin, Jeff Henkel, and Ryan Montgomery ("That Team") pose with Mayokun Ojo and their prize after winning the Fall Olympics.

On November 9th, 2012, the students of Leonardtown High School held their very own Hunger Games…without the sacrifice, of course! Students from all four grades gathered in the gym on Friday night to compete in all sorts of athletic events, including tug-of-war, soccer, dodgeball, and even can stacking! This event, sponsored by the school’s chapter of National Honor Society, was held to benefit Harvest for the Hungry.

Over the course of the night, over twenty teams of students (and two teachers) and battled it out in the quest to win a grand prize of $100. Although the night definitely did not end without some injuries and injured pride, all participants and spectators enjoyed the event. Many students showed their team spirit by wearing creative costumes with witty names, like the “A-Team,” which was composed of seniors Erin Rothback, Sarah Fischer, Julie Verbos, and Ishani Guha, possibly named after the popular Ed Sheeran song and the hilarious Emma Stone movie Easy A. By the end of the night, though, Ryan Montgomery, Dane Lemmon, Troy McLaughlin, and Jeff Henkel (I think that’s who it is—I’ll check), also known as “That Team,” were crowned the Fall Olympics Champions and were awarded an oversized check.

Even though they didn’t win, seniors Julie Verbos and Ishani Guha had an amazing time during the competition, saying, “It was a great way to get involved and do something fun during our senior year. All of the events were crazy: dodgeball was a little scary and can stacking was really intense, but we would definitely do it again!” They also commented that “Even if you aren’t athletic, you could still participate and even win, like we did with can stacking!” Their friends Heather Cusic and Kaitlynn-Marie Cendana agreed, adding that “Can stacking was hilarious to watch! It was so much fun just to watch and cheer on our friends.”

According to National Honor Society president Josh Hall, that’s what the Fall Olympics were all about: “The event was a friendly athletic competition that allowed students to show skill and teamwork and just have a great time. We raised almost $700 for Harvest for the Hungry during the event, so everything’s going to benefit a great cause. It was also a good way to spread the word about what NHS is and what we do, since not everyone knows what kind of events we run.” If you missed out on this fun-filled night, don’t worry—NHS has a few more sporting events in the works!