The Situation in Myanmar 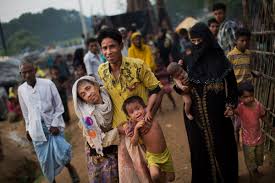 There are thousands of refugees entering Bangladesh each day. They cross the border of Myanmar where the state military has launched a violent and chaotic attack against an ethnic minority group called the Rohingya. The United Nations (UN)  reported that since August 2017 about 400,000 Rohingya men, women, and children have fled their homes in Myanmar’s Rakhine State. Reports claimed that the military have been killing and raping the Rohingya and has set their villages on fire. Satellite imagery (from the BBC) showing burned villages prove those reports. Due to the fact that Myanmar refused access to human rights investigators, the current problem can’t be fully assessed but the situation remains or looks like a textbook example of ethnic cleansing. The UN defines the term ethnic cleansing as, “ a purposeful policy designed by one ethnic or religious group to remove by violent and terror inspiring means the civilian population of another ethnic or religious group from certain geographic areas”. What makes Myanmar a textbook example is that the military has been launching attacks on the Rohingya. A muslim minority in a majority Buddhist country. Violent tactics have forced tens of thousands of Rohingya to flee their homes. While many fled to Malaysia and Thailand most ended up in Bangladesh. The recent flood of violence is the lastest in a pattern of discrimination that started over 50 years ago. In 1962, Myanmar then called Burma was taken over by the Myanmarian military in a coup. They got rid of the country’s constitution and created a military junta (a government lead by military leaders). Like many dictatorships, they promoted fierce nationalism based on the country’s Buddhist identity and when they needed a common enemy to help unite the population the rohingya were singled out as a threat. Tensions between the Burmese Buddhist population and the Rohingya go all the way back to the second world war when each group supported opposing sides. The Rohingya sided with the British colonialists who ruled the country and the Buddhists mostly sided with the Japanese invaders hoping they’d help end the British rule after the war, but even in modern Myanmar the Rohingya minority continued to be an easy target. Although their lineage can be traced back to 15th century Burma, the government has been forcing them out calling them illegal immigrants from Bangladesh. It started in 1978 after a massive crackdown called “Operation Dragon King” forced 200,000 Rohingya to escape to Bangladesh. The military reportedly used violence and rape to drive them out. Near a hundred and seventy thousand Rohingya reportedly returned to Burma. Then in 1982, the government passed the Citizenship Act recognizing 135 ethnic groups. The Rohingya, with a population of about 1 million, were not on the list and became a stateless people. In 1991, Myanmar’s military launched another campaign called “Operation clean and beautiful nation.” This time 250,000 Rohingya fled to bangladesh. Tensions continued to build against the Rohingya in the 2000s. Violence broke out in 2012 when four muslim men were accused of raping and killing a buddhist woman in Rakhine. Buddhist nationalists backed by security forces attacked muslim neighborhoods, burned homes displacing tens of thousands of Rohingya again. Human Rights Watch deemed it an ethnic cleansing campaign. By this point the Rohingya were persecuted disenfranchised and stateless. In 2016, a Rohingya militant group, the Arakan Rohingya Salvation Army, came up and coordinated small-scale attacks on border police stations. An attack on August 25th, 2017 left 12 police officers dead and sparked the current crisis against Rohingya civilians. A brutal retaliation by the state security forces has lead to 400 deaths and the mass departure of 400,000 Rohingya to Bangladesh. Since the August attack 210 villages have been burned to the ground. The violent campaign has triggered the fastest growing humanitarian crisis in recent years, but Myanmar’s de facto leader and Nobel peace prize winner Aung San Suu Ky has barely acknowledged the attacks. More than 50% of the villages of Muslims are intact they are as they were before the attacks took place. Reports claimed that the military has planted landmines along the Bangladesh border to prevent the Rohingya from coming back. Myanmar’s government has consistently driven the Rohingya out of the country. Over the last five decades it has stripped away their citizenship, terrorized them, and destroyed their homes, and now it wants to keep them from ever coming back.