In an Ironic Way 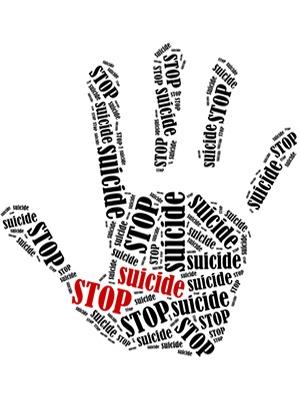 We’ve all said it. Oh my god, she makes me want to kill myself. We’ve all done it, extending our pointer finger out with our thumb up, bringing it to our head. Bang. It’s all a joke right?

What if it’s not? What if the off-hand comment about dying is a cry for help? We all go to those Suicide Prevention Seminars, where we half-listen (or don’t at all) to the speaker, telling us to always take a suicidal comment seriously. But, when it’s ingrained in our humor, how are we to know when it’s a joke and when it’s for real?

The humor of our generation is strange to say the least. Someone looks at a garbage can, says “me” and everyone knows what they are talking about. Someone sighs in class and we all look at each other and remark, “same.” You have trouble hearing someone and after uttering “what?” three times, say “kill me!” Something annoying happens, like someone beats you in a friendly game of checkers and you laughingly groan, “kill yourself!” with a smile to let them know you don’t actually mean kill yourself. It was just a joke.

This type of humor, jokingly saying we’re going to kill ourselves, is a part of 21st century parlance. It is just as much a way of expressing annoyance as “oh darn” or “holy cow.” No one actually thinks we are going to go home and hang ourselves. It’s a figure of speech, a hyperbole, an exaggeration. Sometimes we just say it to get a laugh. I myself have mouthed to my friend “kill me!” just to see her laugh. And I’ve heard multiple people shout at their friends “kill yourself!” when it’s appropriate to be angry, but only jokingly so.

When I was in middle school, before this abstract humor came about, my best friend’s cousin whispered to her that he was going to the back of the school to kill himself. Abject horror spread across her face as she thought maybe he wasn’t joking. She didn’t know who to tell or if he was even serious, but she was too scared to take that chance. We ran outside, desperate to find him, but worried what it meant if we did. I left to find a teacher while my friend continued the search for her cousin. When she found him, he laughed at her. You actually thought I was going to kill myself?! I remember she wasn’t particularly close to her cousin; she was always complaining about his antics and I dreaded hanging out with her when he was around. They were more like siblings, always teasing and pushing each other. But, I will never forget the terror on her face as she thought of the possibility of him being gone forever. And I will never forget the way he laughed in her face, in disbelief that she believed him.

Now, if someone told me they were going to go to the back of the school to kill themselves, I would laugh and say can I come too? Because that’s what is expected. If I took every single threat of suicide seriously, I would never be off of the Suicide Prevention Hotline.

Recently, in response to the growing macabre humor, my friend and I have added  “in an ironic way.” When I learned what I got on my math test I wanted to kill myself-in an ironic way. It’s kind of our reassurance; to let each other know we aren’t suicidal.

Joking is also a coping mechanism. For someone who has had suicidal thoughts, or suffers from depression, making light of a dark situation eases the pressure. It lessens the severity, or maybe the need, to end things. It turns a bad situation into a funny one; maybe it’s not the healthiest way of dealing, but it’s better than going through with the deed.

But, while it’s not okay to joke about ending your life (even though you may think it’s funny), it’s even less okay to tell someone to kill themselves. You never really know who you’re talking to; if they are suicidal and looking for a reason to fall off the edge, or they understand our dark humor for what it is; humor. It is not okay to joke about it, no matter how you phrase it, no matter how much you don’t mean it; in the back of their head, they will always wonder what if they meant it?

Joking about suicide is morose and sad and our generation must take it more seriously. But it’s not. It’s funny, expected, common. And I don’t have a beef with that. I cannot tell you what is funny and what isn’t. I myself joke about it. Maybe it’s your way to cope, maybe it’s your way of telling yourself things aren’t as bad as they seem, but once the words kill yourself come out of your mouth, someone out there starts to think about ending their life, and that is not okay.