The Beginning of Thanksgiving 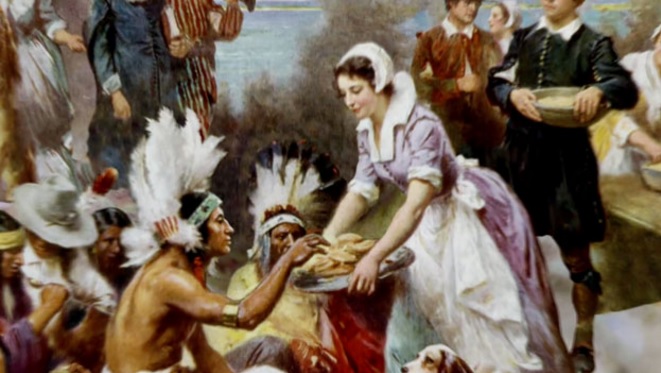 Thanksgiving is known as the day in which we wake up, spend half the day cooking while watching the Macy’s Thanksgiving Day parade, then stuff our faces until we can’t anymore. But what many people don’t know is how the holiday actually got started, as there have been so many children’s tales told about how America itself was established. One of these stories is that of the pilgrims and the first Thanksgiving, which is explained as this great ceremony where the pilgrims and the Indians came together for a feast to celebrate all that they have accomplished. Although that is true, the real story turns out to be not as simple as it sounds.
On September 6, 1620 the pilgrims left Plymouth, England to find the New World. For over two months they braved the horrible elements of a vast storm-tossed sea. Finally, after a long journey, the sight of land come upon them. When they arrived in Massachusetts, it was late November. Before they started anything else, they had a prayer service, and afterwards began building places for them to rest that night. However,the new settlers had no idea the troubles they were about to endure in this new land. During the harsh winter, starvation and sickness got the best of many of the pilgrims, with nearly half dying before spring. Through prayer, perseveration, and some help from the natives, they had a bountiful harvest the next summer.

Very pleased with the great accomplishments of that summer and to thank God, the Pilgrims declared that there would be a three-day feast would begin on December 13,1621. Although many people think that this is the first Thanksgiving, as early as 1607 there were Thanksgiving services held in Virginia that were not quite the same as the one that the pilgrims held, it was just a time in which were just thankful for what they had. But the celebration that the Pilgrims were holding is known as  America’s first Thanksgiving Festival, what we know as Thanksgiving.

A pilgrim named Edward Winslow described Thanksgiving with these words:“Our harvest being gotten in, our Governor sent four men on fowling (bird hunting) we might, after a special manner, rejoice together after we had gathered the fruit of our labors. They four in one day killed as much fowl as… served the company almost a week… Many of the Indians [came] amongst us and… their greatest King, Massasoit, with some ninety men, whom for three days we entertained and feasted; and they went out and killed five deer, which they brought… And although it be not always so plentiful as it was at this time with us, yet BY THE GOODNESS OF GOD WE ARE… FAR FROM WANT.”1

That’s how the great holiday got started: through the Pilgrims and natives coming together in a time of need to produce an abundance of crops to feed everyone. So many people get wrapped up in the holidays that they forget the real meaning of them.  But at its core, that is how it is still celebrated today- it’s a day in which we come together and are thankful for all the things we have accomplished and all that we have.