Why Should We Vote? 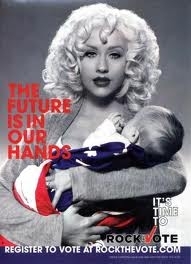 “Too many young people don’t know—because of the apathy that is born of ignorance.”
-Mr. Denny, Global Diplomacy teacher

Why should young people vote? Why should we even care about what’s going on? It doesn’t affect us, does it? Why don’t politicians seem to care about us? Do we even make any difference?

If you want an easy reason why you should vote, here’s one: If you vote, you have license to complain about what’s happening. If you don’t vote, don’t whine! But for those of you who want a more in depth reason, here you go: Young people need to vote because what happens with the government affects us.

But how does it affect us? We’re not just kids anymore, boys and girls. If you are old enough to vote in the 2012 election, which means you’ll be at least 18 by voting time next year. That’s legally an adult. Just because most of us are going to college and not getting jobs right away doesn’t mean that what happens with the government doesn’t affect us. The taxes and spending that the next president institutes will be the ones that we have to endure. Mrs. Taylor, a Government teacher at Leonardtown, says, “The fact of the matter is, whatever government policy is put into place now will affect your wallet, your freedoms, and your personal liberties. What you ignore now will become very important to you in the future. Sure, maybe you don’t care about tax hikes when you are 18, but when you are a full-time working adult, you are going to be concerned with how much you give the government, either willingly or unwillingly.” You don’t want high taxes? Vote for a president that won’t institute them. Do you want more funding for education, or for research on cancer, or for defense? Vote for it. If you don’t, no one else will. Your vote for something could cancel out another vote against it. Mr. Denny, a Global teacher here at Leonardtown, said, “Politicians are listening to those who are involved—the elderly generation—and there are conflicting needs. Who’s really speaking for the future?” We should care about what’s happening because we are the ones who will deal with it. We have to speak for our future.

Politicians sometimes don’t seem to care about our generation, and that’s a major reason why we don’t vote. We think we don’t matter, so we don’t vote, so politicians don’t cater to us (because we’re not going to vote for them, anyway), which starts the vicious cycle again. Mrs. Taylor says, “Politicians don’t seem to cater to your generation because, statistically speaking, 18-24 year olds don’t vote. If a generation is not going to show politicians they care by voting, why should they care what you think?” We can show Washington that we’re a force to be reckoned with. We can make a difference, if we try. You just have to vote or get involved in some other way.

Young people can make a difference. This is evidenced by the uprising in Egypt. Young people, with only the help of Facebook and other networking sites like Twitter, toppled a dictator of three decades in 18 days. If they can overtake an entire government, we can choose who will be in office. Many of them sacrificed their freedom and even their lives to do this. All we have to do is sacrifice a morning to go to a voting site and vote. When asked about the uprising in Egypt, Mrs. Taylor said, “It shows that numbers talk and actions speak louder than words. Those young people were upset and wanted to be heard. Instead of griping about it to their friends behind closed doors, they stood up and said that they weren’t going to take it any more.”

For more information on voting (and registering!) visit rockthevote.org.