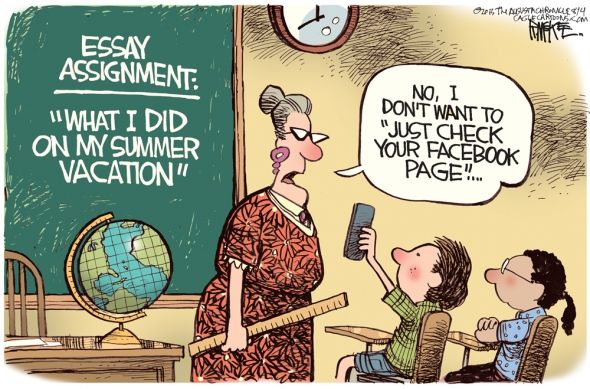 Today, the younger generations grow up in a very different environment from what I grew up in, just as I grew up in an environment greatly different from my parents. I never could fully understand why until I personally lived through some of the visible changes the world is making, especially technologically, and got to see how it’s affecting the young ones of this world. Now, that intro is super vague, and you might ask yourself ‘What exactly is she talking about?’ Well, specifically, I’m talking about iPhones, iPads, gaming stations, and everything in between! Now, young boys are addicted to playing online games, even at the age of only 7!

Generation Z is comprised of people born from 1995-2012, but even kids born in 2008 had a different childhood than I had, being born in 2003. Kids are still kids- wanting to go outside, play with their friends, but ultimately, they aren’t being brought up in the true environment of being a TRUE KID. What happened to these kids begging their mom to let them stay out past 6? What happened to falling off your bike dreading the fact that you had to go inside and get mom to bandage up your big scab for you, because she might make you stay in? I asked a few teachers that have children from infant age to 15 years old what their views on technology are, let’s see what they had to say.

Mr. Bressler, a father of two girls, a 6 week old and a 6 year old, he responded with “I think technology can make anything better, within limits. I believe giving people under 18 access to things like cell phones will be looked back upon, with the same confusion that we looked back on giving kids access to tobacco, pornography, and guns. I don’t think kids in the future will have unlimited access to the internet at pre teen and teenage years, I think that that will be regulated in the future.”

In addition, Mr. Bressler stated “My six year old is not allowed to watch television at all during the week, only on the weekends, if she had a good week. They are not allowed phone time, again, unless it’s the weekends, and it is in small increments. She ends up watching videos on youtube for about twenty minutes,  then I take it away. My mother is my chief concern because she will give her the phone, only because it makes the kid happy, and I don’t like her having too much access, because you can just see the brainwashing effect it has on her just staring at the screen.”

Ms. Fox, a mother of two boys, an eight year old and a ten month year old said, “I think it has its pros and cons because on the one hand you have an infinite amount of resources, so it’s good in that sense, but at the same time I think it causes them not to communicate with one another, like they don’t know how to talk to one another.” She also said “using the emojis makes these kids not know how to spell simple words anymore… I feel like they should use it, but it should be controlled.”

Additionally, Ms. Fox said “For my son, he can’t even get on YouTube, I blocked it completely because it’s so much stuff unfiltered…there’s no way for me to control it…He can watch YouTube, but he has to watch it on the house TV…”

Secondly, I asked if they control their children’s usage of electronics, and Ms .Reynolds, a mother of three, ages 9, 14, and 16, retorted with, “ I don’t have a set rule for my kids with electronics.  If their homework is done and we are not doing anything as a family, I don’t mind if they are on electronics. It’s mainly video games, like Fortnite.  Doors stay open so I can see and hear what they are doing and saying. My youngest son is probably the most “addicted” He’s 9. He loves to watch videos on youtube in addition to playing Fortnite.  He has to watch it in the open and sometimes I watch it with him to make sure it’s appropriate. It’s usually Dude Perfect and other people playing Fortnite. If I think he’s been on it too long, I just tell him to get off. I usually let him watch videos to help pass time, like at his older brother’s or sister’s school events when he gets bored. I used to let him watch them in the car, but we decided that was a good time to talk about our day so he doesn’t have electronics in the car anymore. My older children (14 and 16) have the usual social media sites, snapchat and instagram etc. They honestly are not on them much. I am not on them to be their friend and spy because I think they should have some privacy. We do talk about what’s appropriate on social media and how things never go away on the internet.”

So it’s not like they totally take technology and its advantages away from their children, it’s just monitored, but also, monitoring your children’s device time/usage goes along with age too. Older kids will be given more freedom, while younger children are shielded away for the most part because of their brains being in their early stages, because of them not completely knowing right from wrong… so if the kid were to hear something inappropriate, they could easily pick the language up and use it, then get in trouble for it.

Lastly, I asked how they think the restrictions will help, and Mr Bressler ended his interview with “She’s forced to use her imagination and her ability to communicate with other humans to get what she wants and entertain herself, where I believe giving a child that young a phone bypasses all the ‘normal behavior’ required to entertain oneself to come up with something entertaining and worth doing. It bypasses human imagination…if what we see on a screen is already fantastic, they don’t have to imagine it, and therefore I feel it doesn’t develop a true sense of vision for children.”

Whatever you believe, my personal opinion on technology use for young kids is quite similar to those given above. No, I don’t believe it should be totally stopped, but it should be highly monitored and confined. The only piece of technology I had to use when I was a kid was a TV or a Nintendo, and I was never a big gamer, or a TV watcher. My parents didn’t have a smart phone until I was in late elementary school, so I was never really exposed to technology until I got one of my own in middle school. This whole technology problem going on in the world today really makes you think; What can you do to help your future kids? Just think about it.