Joker: A Joke or a Masterpiece? We Clownin’ 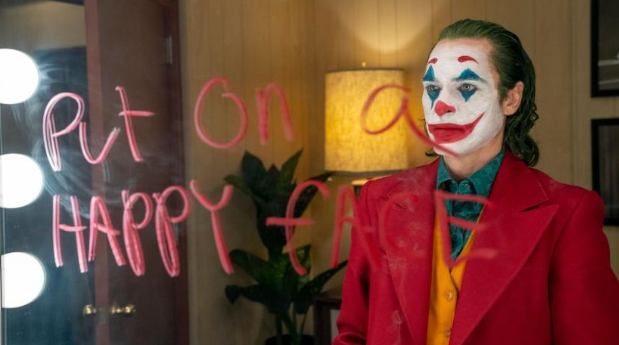 Many of us grew up knowing Batman’s origin story like the back of our hand — a boy who watched his parents get killed in front of him and inherited his family’s fortune, but couldn’t let the corrupt city of Gotham continue tearing itself apart. He faced his fears and used his immense wealth to become (nanananana) Batman, fighting countless bad guys through the night, including his greatest rival, the infamous Joker. So, what’s the clown’s backstory? That’s exactly what Todd Philips aims to answer with his new movie release of Joker.

Released on October 4, 2019, Joker tells a story about Arthur Fleck, a failed stand-up comedian with mental disabilities. He struggles with his job as a performance clown throughout the day and takes care of his mother back home. Using this premise, Philips builds contrasting themes throughout the two-hour span of the movie to depict the Joker’s complex character. Arthur’s mental state progressively gets worse and more twisted as the movie continues, his actions becoming more intense and devastating. This movie is not for the faint of heart, and its R-rating is within good reasoning; it contains strong, bloody violence, disturbing behavior, language, and more. But if you’re up for it, Joker is unquestionably a film worth watching.

Before we proceed, it’s important to note that the film is only loosely based on the comics and relies mostly on the director’s interpretation. When I watched Joker, I was grabbed from start to finish. Then again, one of my favorite genres is psychological thrillers. Philips’s depiction of Arthur Fleck’s slow, but eventual descent into madness is thorough. Not only is it established through the plot, but through cinematic techniques such as camera shots, angles, and color.

The movie contains multiple close-up shots of Arthur during his times of distress or character progression, most lasting longer than comfortable and creating an eerie, intense mood between the audience and the viewer. The film also utilizes several camera angles to represent Arthur’s place in society. Throughout Joker, Arthur craves to be included and recognized as a member of society and the use of camera angles not only shows his desperate longing to be accepted by society, but also how his social status changes as his character develops. At the beginning, we see how Arthur Fleck is neglected, ridiculed, and isolated from society; during this time, high angles are heavily used to look down upon Arthur and belittle him. Then by the end of the film, to contrast his original vulnerability, low angles are used during his transformation to the Joker, displaying his newfound power.

In conjunction with specialized camera shots and angles, the director applied specific color sequences to the movie to amplify emotions throughout the film. Joker uses several darker color tones for the entire duration of the movie, conveying the somber mood of the film. Furthermore, Arthur is especially surrounded by darker tones of yellows, whether it be shown through his wardrobe or his environment. This use of yellow throughout the film could symbolize Arthur’s attempt to be happy, but in reality, his mind is severely twisted and reckless. As his character becomes more sinister, we begin seeing these yellow tones be infiltrated by red, a color that symbolizes power and aggression.

All in all, Todd Philips’s Joker is a cinematic treasure. Every aspect of the movie was undoubtedly treated with care and precision. If you haven’t already—and are of age—I urge you to sit down and enjoy this movie in all its brilliance, you won’t regret it.