All the Personalities Equally Suck: A Review of Split 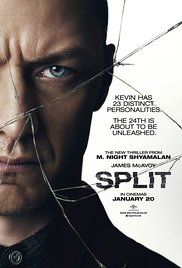 24 personalities – With this many different characters in only one actor, you would think that M. Night Shyamalan’s Split would have a little something to offer.  But it didn’t. From getting Dissociative Identity Disorder (DID) all wrong to butchering the ending, this movie is definitely not a must see.

As a current psychology student, the prospect of a movie tackling the complex psychological disorder DID seemed promising.  How could a film informing the public of such a heavy topic be a bust?  Let’s be honest, M. Night Shyamalan did the exact opposite.  Instead of informing the public of a sensitive topic and the symptoms of the disorder, Shyamalan successfully stigmatized mental illness.  The movie focused on the extreme aspects of the disorder, rather than the truth, creating a negative public image of an already misunderstood disorder.  DID may affect up to 1% of the total population (Nedelman).  How would you feel if no one understood you?

Don’t get me wrong.  The movie wasn’t all bad.  Though it started out well, the movie got a little too weird when the beast personality started eating people alive.  The beast personality had virtually no limits; he climbed up walls, couldn’t be killed by gunshots and was able to change his body composition.  The beast’s physical abilities were by no means realistic or humanly possible, effectively delving the movie into the sci-fi realm, and not a possible scenario.

But don’t let me convince you.  Go see the movie and decide for yourself if Shyamalan did a good job.