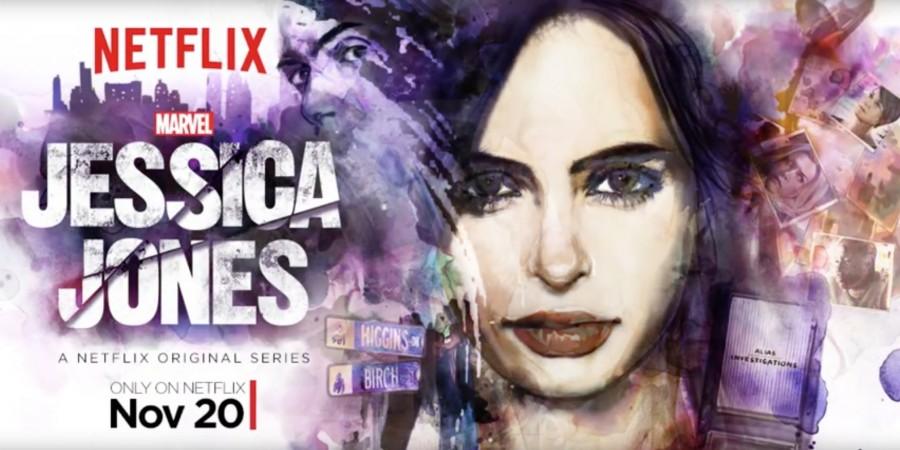 Please note that the source material may contain possibly triggering subjects such as rape, child abuse, drug abuse, and violence. Jessica Jones is not suitable for all audiences. Viewer discretion advised.

The latest addition in the Marvel superhero lineup is a Netflix TVprogram starring a relatively unknown hero by the name of Jessica Jones. Jessica Jones consisted of 13 episodes that were all released on Nov. 20, each episode being roughly 45 minutes in length. Krysten Ritter stars as Jessica, and other cast members include David Tennant, Mike Colter, and Rachael Taylor.

Supposedly, Marvel has announced plans that Jessica Jones, along with Daredevil, Luke Cage, and Iron Fist will meet up in a mini-series crossover titled The Defenders. Jessica Jones is a rather recent superhero, having only shown up in Marvel’s comics in the early 2000s – not having the long history that Spiderman or Captain America do.

In this case, it works for the series marvelously. It offered showrunner Melissa Rosenburg an opportunity to use the character as she wished without fear of intense repercussions from die-hard comic fans. Without any sort of limitations, she was able to mold a character that had a stone-cold appearance.

For those who don’t know the story, Jessica Jones is a private investigator that gave up on being a hero after an intense trauma with a mysterious figure that goes by the name of Kilgrave (David Tennant.) The way the tension is built surrounding Kilgrave is phenomenally done – he is pulling the strings behind the scenes for about the first half of the season. Even in the first episode he left the audience shuddering.

Plot is certainly a strong point in this series. There are no loose ends and every point shows up later on in the story, teaching the audience to pay attention to details. Very rarely does the show drag on, even with all the dialogue dispersed throughout.

Jessica Jones is also a character to be appreciated – she’s sarcastic, she’s witty, she’s rough around the edges. There’s nothing soft or gentle about her, which is usually a role reserved only for male characters. Instead of being the quintessential justice-serving and vigilant superhero, she ends up punching her way through things and flipping people over tables.

It’s rather satisfying to see the brute strength she has and the way she uses her powers, but only to complete her job to pay the rent. She is complex and simple at the same time, and her relationship with Trish (Rachael Taylor) is refreshing and realistic – there is nothing catty about their friendship, or anything superficial that might cause you to roll your eyes in other media.

This is not to say the show is perfect. The noir feeling they built up in the first two episodes and the theme song seems to get lost somewhere along the way of the show, replaced with the heavy drama that takes over the show. It left the audience wanting to see more of Jessica’s investigative process, gathering clues and taking pictures like we were able to see earlier.

There was also the matter of tragedy versus unjustified emotional pain that seems out of place. It seems to be tragedy without a purpose at points. Don’t get too attached to any of the side characters, as there is a good chance they get killed off – sometimes it feels like the deaths are only for shock value, and to cause Jessica pain just for fun. She doesn’t always seem to learn a lesson from it, nor does the impact have any sort of importance that couldn’t have been achieved in almost any other way.

If you’re a big fan of Marvel superheroes, this also might not be the show for you. Despite the way Jessica undeniably has powers, this doesn’t fit the mold of anything else that exists in the cinematic universe. She’s not heroic like Thor, nor does she have the charisma of Tony Stark. It doesn’t exactly feel like the show belongs in the same universe as all the others, leaving us with a rather odd disconnect.

However, the good far outweighs the bad. Jessica Jones handles PTSD in a non-offensive way and doesn’t romanticize the mental illnesses that were caused by her abuse. Krysten Ritter handled the character beautifully, and described it as her “greatest acting challenge.” According to an interview with Abraham Riesman, she spent hours and hours with her acting coach in order to properly portray her.

Jessica Jones might not be sweet, but she gets the job done. And we love her for it.