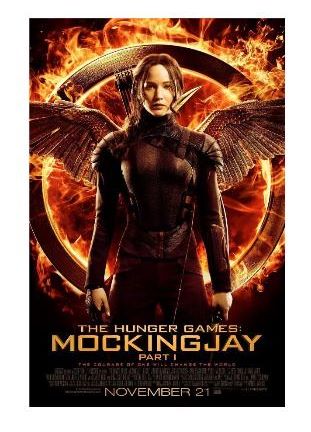 The new Hunger Games movie arrived in theatres just before Thanksgiving and, true to the holiday’s spirit, fattened itself on its massive blockbuster earnings. In its second weekend, Hunger Games continued to top the list of movie releases, well above anything else out. If you haven’t seen this movie yet, it’s definitely one I would recommend.

The basic story leading up to the movie is this: Katniss Everdeen (Jennifer Lawrence) is a girl living in the nation of Panem, which was formed after some apocalyptic event. The nation is technologically advanced, having hovercraft and holograms, but also has an oppressive government. There is the Capital city, surrounded by twelve districts; a thirteenth one was said to have been destroyed during a civil war about 75 years before the start of the series. What’s the big problem, you may ask, other than the oppression? Well every year is an event called the Hunger Games, in which two children from every district fight in a battle to the death for the amusement of the Capital. Katniss volunteers in place of her sister, goes to the games, and wins by defying the Capital and threatening suicide over killing her friend. Next year, there’s the next game and it just so happens that this time, the only people able to fight are previous victors. Well, there was a plan between some of the other fighters to break the game, which Katniss ultimately accomplishes, and gets rescued by District 13, which actually survived underground. Surprise! Now you’re pretty much caught up.

Hunger Games: Mockingjay is another great installment in the series. This movie is definitely filled with action, which isn’t surprising considering it revolves around Katniss being the face of a civil war which engulfs the whole country. Deviating slightly from the book in matter of perspective, the movie does a good job at getting your heart racing.

Criticism of the movie include it being split into two parts, like every other movie series to come out recently. True, that does seem annoying, but it really deals with one of the big problems in the Mockingjay book: too much was condensed into it. This was pretty annoying, when reading the book there would just be jumps forward because though something important happened, Katniss wasn’t there and she only heard about it. By giving these events screen time in the movie, the stakes seem higher and the revolution is shown to be widespread; it also makes for a more action-packed film. Of course, condensing it all into one movie would either mean getting rid of these bits and rushing things through, or sitting through a 5 hour movie.

The cliffhanger ending, which I WON’T SPOIL, made some people angry in that it ended at a spot that didn’t seem satisfying. Of course it wasn’t satisfying, that’s the point of the cliffhanger; otherwise they may not want to see the next movie. The placing of the ending makes plenty of sense story-wise. The revolution is gaining ground, and they’re ready for a major offensive. It’s a good milestone, and ensures the next book will be filled to the brim with action and lead to a satisfying conclusion. They may be two movies, but they’re both two halves to the same story.

The Hunger Games: Mockingjay Part 1 is a great movie; one of the best of the year. It’s full of action and suspense, and holds fairly true to the plot of the novel, though takes liberties in the storytelling, which ultimately pays off. Five out of five!