The New Heroes on the Block 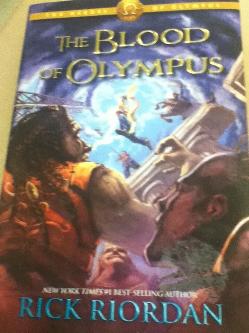 Rick Riordan’s hugely popular series about a modern world where Greek gods exist has sold over twelve million copies and has been translated into thirty-four languages so far. All five books were published between 2005 and 2009, and movies based off of the first two books were released in 2010 and 2013. When Riordan’s son was young, he would ask him to tell bedtime stories about the Greek gods. Eventually, he ran out of myths to tell, and his son told him to make up a story. Off the top of his head, Riordan made up his protagonist Percy Jackson and his quest to retrieve Zeus’ lightning bolt. Riordan’s son enjoyed the story so much that he told him to make it into a book, and thus the Percy Jackson series was born.

Why are Riordan’s books so popular with young readers? In the words of sophomore Kaitlin Beasley-Polko, “They give you a good insight into the culture of the Greeks and Romans, and they give you information about the Greek gods.” Aaron Hines thinks that Riordan’s most well-known series, the Percy Jackson and The Olympians Series, is so popular because the main character “talks to the reader” and makes the reader feel as if they were there, in the middle of the action. Perhaps Riordan’s books are so popular simply because they’re different from most teenage literature today. Although there are plenty of fantasy books out there, not many focus on mythology in the twenty-first century.

The Blood of Olympus, the last book in the Heroes of Olympus Series,was released on October 7. It was the most-talked-about book on social media in August 2014. Hopefully the conclusion to the series won’t disappoint—many faithful fans have been waiting for this release for a year.