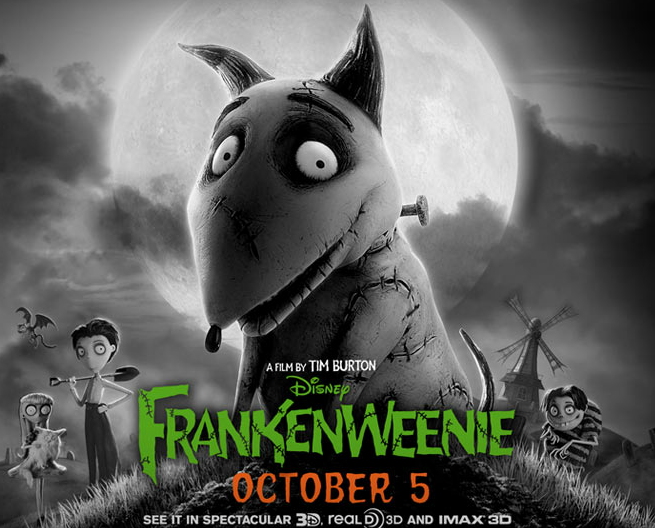 If you ever want to take a younger sibling to the movies for Halloween season, Frankenweenie should be your first choice. Young Victor has a dog named Sparky that happens to be his best friend. Other than playing with his dog, Victor is mostly into science and making videos. Victor’s father notices that all he does is stay in the house or play with Sparky, so he makes an attempt to get him out of the house to go play sports with the other children from his school. While playing baseball Sparky ran to go get a homerun ball that Victor hit, but gets hit with a car while retrieving it. The days after Sparky dies, Victor sits through his normal days in class just doing the regular things. One day his science teacher did an experiment in class showing how a dead frog’s muscles react when he electrifies it. While seeing his teacher do this, he thought of the brilliant idea to bring Sparky back to life.

Digging up Sparky’s body and electrifying it to make him come back to life, finally works. Trying to keep this secret from his parents and everybody else, Sparky got out of the house and Victor’s suspicious friend found out about it in no time. Jealousy occurred when his friend saw this so he held Victor’s secret against him until Victor showed him how revive a dead fish. Victor agreed as his friend picked up a dead fish so they could do the same thing. The same thing happened to the fish except it was invisible and it didn’t live as long. After Victor’s jealous friend told all the other kids in the science fair as well, all the children wanted to do it and instead of them coming back as loving animals they come back as monsters that nobody can control.

This movie appears in black and white, which gives the perfect mood for a children’s Halloween movie. I and my friends really enjoyed the movie as well as children do too. The movie has four stars and is great to bring your siblings to. “I should have brought my sisters to this movie, they would have loved this!” said Steven Stillwell from Great Mills High School. From my perspective I thought that it was a good movie and the ending wasn’t really what I predicted it to be. For both a teenagers and child’s perspective, I would have given it two thumbs up!