Another Series to Obsess Over! 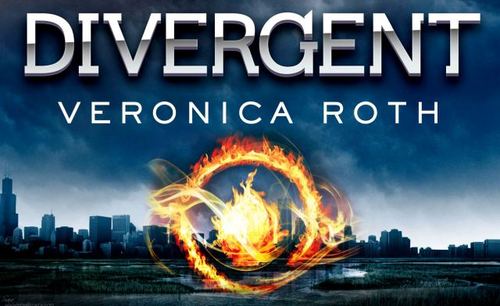 If you liked The Hunger Games trilogy then you will love Divergent. This book is easily one of the most action-packed and enjoyable stories ever written. It has everything from family drama, shifting alliances, knife throwing, brutal fistfights, death, and of course, an incredible love story. Each page is filled with plot twists that will keep you guessing until the very end but every situation is still somehow relatable to the average teen. This is obviously the product of an amazing writer’s ability because Veronica Roth has simply outdone herself.
The story follows Tris, a sixteen-year-old girl living in a utopian society with a very rare and dangerous secret. In her society, at the age of sixteen every person is forced to choose a faction to live in for the rest of their lives. Each of the five factions endorse a specific quality in a person and each citizen takes a test to determine which faction they would fit into best. If a person does not choose or does not pass a faction’s initiation, they are forced to live the poor, worthless life of a Factionless citizen. Under the society’s motto of “faction over blood”, Tris has to make the decision on whether to stay with her family in the faction she grew up in or move to a faction where she will feel like she belongs. Her choice is made even more difficult when she is told that she is Divergent, a word that describes people who fit into multiple factions. After picking a faction, Tris has to endure the pain of living with her choice and figuring out just what it means to be Divergent.
Divergent is filled with nonstop action and suspense and each page will leave you wanting more. From jumping off buildings to hand-to-hand combat, this book is anything but boring, but the softer, more emotional moments add just as much to the story as the action does. Tris’s love story makes her character a little more vulnerable and the situation in general is rather relatable for a story that takes place in a time where murder is almost unheard of and war is a thing of the past. Tris’s character is easy to empathize with even though the events of her life are completely different from anything anybody today would have to go through. She is just a teenage girl who has to make a huge decision and then live with the choice she made; all the while trying to figure out who is her friend and who is her enemy. A highly relatable situation, except for the fact that the consequences mean she has to face her worst fears and her enemies want her dead. Excitement and pure entertainment make this a book that you just will not want to put down. It has something for everybody and will have you on the edge of your seat the entire time.
Hunger Games fans will absolutely love this book, not just because of the never-ending action and the fact that both stories are centered around an over-controlling society, but because the story also ties into one of the most romantic and adorable love stories ever written. The added element of love just balances out the heart pounding and violent combat scenes. ”I loved Divergent, it was similar to Hunger Games but really unique at the same time and extremely exciting”, said sophomore Jordan Martin. One of the best parts about this book is that you don’t even have to wait for the next installment to be published. Insurgent, the sequel, was just released at the beginning of this month, meaning you will not have to wait to know what happens next in the twist and turns of Tris’s turbulent life. This is quite convenient considering that the shocking end just leaves you wanting more.