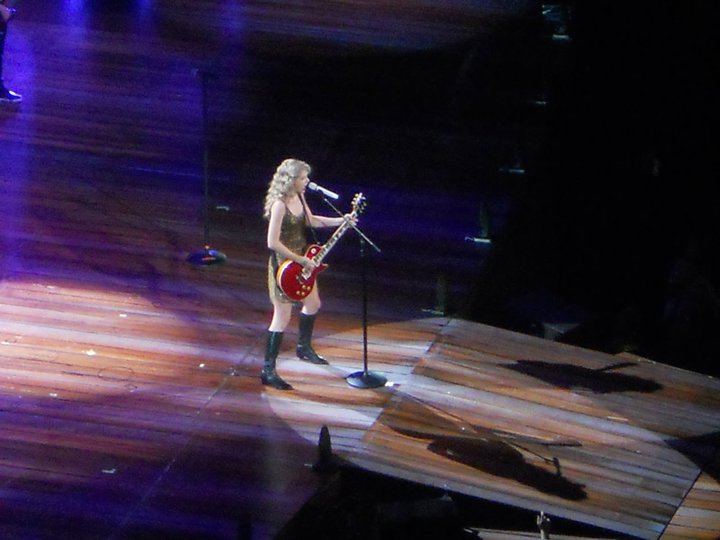 You can hear the screaming fans. You can feel the energy in the air. You get excited as the fireworks explode and Miss Taylor Swift appears on stage. Then you realize… You’re sitting on your couch. Taylor Swift’s “Speak Now World Tour Live CD & DVD” is simply exquisite and one of the most exciting things you will ever watch, especially if you’re a fan of the country-pop idol. The DVD gives you a front row seat during one of Taylor’s sold out concerts; the movie is actually different clips from a bunch of Taylor’s shows put together into one concert experience, and lets you experience one of the most raved about tours of the year without spending hundreds on concert tickets. “Speak Now World Tour Live” is one of the most exhilarating concert-turned-movies ever and worth the twenty four dollars you will most likely spend on it, although the price does seem a bit steep. This is also coming from someone who experienced one of Miss Swift’s concerts in real life. The same feelings of excitement, adoration, and pure amazement that you feel during an actual concert hit you just as hard when watching the movie.
Taylor’s amazing talent, strong stage presence, and obvious gratitude towards her fans just make this DVD wonderful, and the fact that you don’t run the risk of getting nose bleed seats just makes the live movie that much more appealing. Taylor makes the entire show feel personal even though there are thirteen thousand fans screaming in the background. Lauren Kanowicz, a college graduate and a fan of Taylor Swift said, “Taylor was so invested in her performance and the entire concert displayed how creative she can be.” Between fireworks, flipping trapeze artists, and adorable scenes acted out during songs, Taylor adds moments that make the show feel even more magical. A floating balcony in which she can hover above the crowd, a spinning, color-changing tree, and Taylor herself running through the audience to hug fans, names just a few of the surprises. Add in a backstage look at the making of tour and it feels like you’ve gotten to know Taylor personally. “Taylor is a true performer and [seeing her live] was beyond amazing,” Lauren said as she continued to praise Swift for her performance.
The DVD comes with a CD that has the songs from Taylor’s tour on it. The CD does showcase Taylor’s talent but the screaming fans seems much more prominent while listening to the concert on a gloomy Monday morning than it does in the movie and it’s a bit of a turn off, however, the CD does include some songs you cannot get on a normal Swift album including her cover of Train’s “Drops of Jupiter” and mash-ups of some of her favorite songs. Though the CD is decent, it may have been better to sell the DVD separately because it is the better buy of the two. Many people who will buy this duo pack will be huge fans or people who want to relive the concert for themselves, like sophomore Amanda Major who went to a show herself. She said that “I loved Taylor before the concert but seeing her live was amazing” and that she “made everyone in that concert feel like her personal friend.” Now don’t you want to see what all the hype is about?