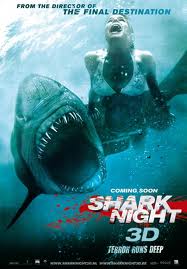 Shark Night 3D hit theaters on September 2nd, earning an overall $10,126,458 gross. It was directed by David R. Ellis, director of other movies such as Final Destination 2, Snakes on a Plane, and The Final Destination. The cast featured Sara Paxton, Katherine McPhee, Joel David Moore, and more. Though the movie has a twisted plot and the 3D makes everything more exciting, the movie overall wasn’t very good.

Set in Louisiana, the movie begins with a couple of college friends going to their friend’s vacation house on a secluded lake. But what they don’t expect is sharks lingering in the water. How did they get there? A hurricane? Someone’s sinister plan? This movie introduces several unexpected twists, a prospect definitely different than your usual shark movie.

As David R. Ellis’ first 3D movie, it received a high amount of negative reviews. Rotten Tomatoes reports that the film holds only a 15% approval rating from critics with the consensus that the film was “A joyless excursion into the water that doesn’t even produce good gore or nudity thanks to the neutered PG-13 rating.”

“The 3D effects in the movie were good, but it was boring. I wouldn’t recommend it to anyone or see it again. It’s just another bunch of teenagers going to a lake and getting killed,” said Vickie Owens, a viewer of the movie. “The 3D was good. But unless you like those cheesy Sci-Fi movies, don’t waste your money” said Stephen Mattingly, another viewer of the movie.

Even though many people ended up not liking the movie at all, it did receive some positive reviews. Critic Dustin Putman said, “The movie delivers unexpected twists.”, “The sharks eating people in 3D was awesome!” said critic Mike McGranaghan.

Whether you, the students at LHS, would enjoy this movie or not, depends on your tastes. If you like cheesy Sci-Fi movies with special effects, then go ahead and check it out. Otherwise, don’t waste your time.